Another summer is winding down, as signaled by the start of the school year.  While some kids may outwardly grumble about it, deep down inside, they probably are looking forward to the daily socialization with friends again…and yes, maybe their teachers too! If you are looking for a few pointers about getting back in the school groove, PBS.org  is a good resource. Whether you’re new to this with a Kindergarten student, or a seasoned veteran with middle-schoolers, there are tips dealing with topics from reluctant students to setting up an effective homework space at home. Common Sense Media is another helpful website for parents with school-aged children. This article recommends apps to enhance math and reading skills. The website is also useful for family friendly reviews of books, videos, movies, apps, and more. It’s important that kids continue to read for enjoyment, not just assignments. Follow these tips from the Scholastic.com blog:

And don’t forget to let children choose their books to read for fun. 9 in 10 kids say their favorite book is the one they picked out themselves.”

Here are a few books to help get over those back-to-school jitters or to give you a good laugh!

Back to School, Mallory by Laurie Friedman  J FRI

Back to School is Cool by Jim Jinkins    ER JIN

The Gingerbread Man Loose in the School by    J MUR

The School is Alive! by Jack Chabert  J CHA

Middle School: Get Me Out of Here! by James Patterson   J PAT

On the Scholastic.com list above, number 4 is why we are here: “Talk to your local public librarian or school librarian for book suggestions. They are a year-round resource for great book ideas for families.” We love helping you find books to read or listen to for the simple joy of reading. Be sure to visit us throughout the school year to help with your assignments or to find something you might just enjoy!  Have a good school year; we’ll be here waiting to see you! Our Summer Reading Program has ended, but we hope you continue to visit us for the remainder of summer break.  Sitting under a shady tree on a breezy summer day or hanging out in a hammock with a good book are wonderful ways to pass the time until school starts again. Here are suggestions from the rest of the Youth Staff’s picks:

Who knew carnivores could be so sensitive? They don’t like it when other animals talk about their eating habits behind their backs. They don’t like being accused of sneaking up behind the bunny rabbits to eat them. So when lion, shark, and timber wolf decide to form a self-help group and try to become vegetarians, things don’t go as planned.

Discover fun projects you can do at home with items just sitting around the house. Tinker around and make a drum set, hovercraft, a catapult, and even concoct something with a science experiment or two! Fantastic ideas to keep you busy all summer!

What Floats in a Moat? by Lynne Berry  E BER

In this funny tale, Archimedes the Goat and Skinny the Hen learn why objects float while attempting to cross a moat in a boat.

Due to an administrative mix-up and after a major prank gone wrong, troublemaker Donovan is sent to the Academy of Scholastic Distinction, a school for gifted and talented students. Donovan thinks it’s a perfect hideout for him, assuming he can fool all the people with the high IQs. But as students and teachers begin to realize Donovan isn’t so good at math or science, Donovan begins to realize his hiding days may be over.

Marvelous Mattie by Emily Arnold McCully    J B KNI     Have you ever wondered why most paper bags sit flat to the ground? A woman named Mattie Knight invented a machine that cut and glued together square-bottomed paper bags. Mattie was a professional inventor living during the Industrial Revolution. Learn about her life as an inventor at a time when it wasn’t considered possible for a woman to understand mechanical complexities. 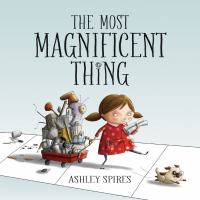 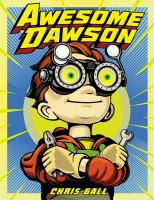 Awesome Dawson by Chris Gall   E GAL                       Dawson loves to turn junk into masterful creations, but one of his inventions goes terribly wrong. Can Dawson save his town from destruction?

Dorothea’s Eyes: Dorothea Lange Photographs the Truth by Barb Rosenstock   J B LAN                                  Even though polio has left Dorothea Lane with a slight physical disability as a child, it doesn’t stop her from pursuing her dream to be a photographer. Her focus to capture the stories of the homeless jobless, and the poor has allowed her art to show the truth of the world.

This creative book shows you how to make fun, age appropriate crafts using old toys, clothes, and other everyday stuff lying around the house. With step-by-step instructions, even a beginner can make cute, earth-friendly creations.