How many 2s are in the New Year’s I Spy Display? How many snowflakes can you find?

Learn about the winter sports you will see at the Winter Olympics next month. 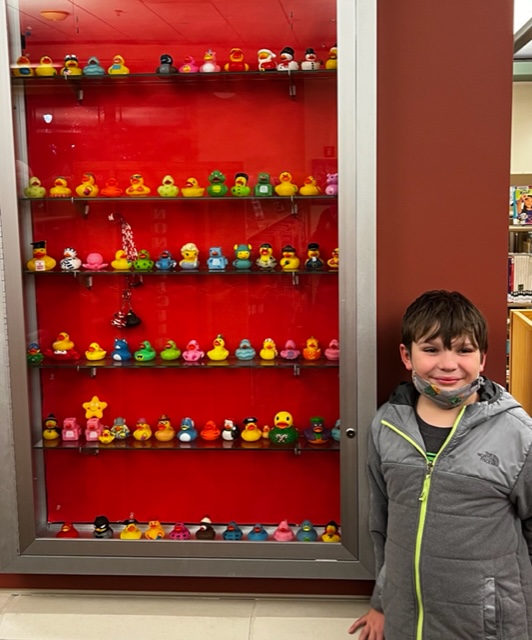 January is International Creativity Month.  What are you going to create?  Come in and see what some of our librarians have created. 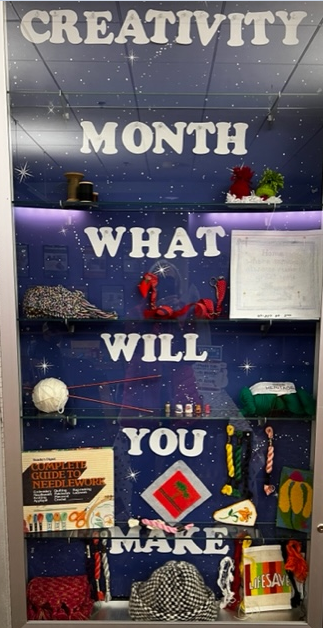 We also have a display of things that you can create with TinkerCAD 3D printing if you are in 4th grade or older.

Come in and find out what 10 animals only live in the United States and North America.

Looking for an activity that can reduce stress, improve your memory, develop patience, and sharpen your observation skills? Spring is a great time to start a new hobby or pick up where you left off last spring with bird watching!! You can start by looking and listening around your home. This is the season of nest building, egg laying, and baby birds chirping. Find out what kind of nest you see and what you can do to help our feathered friends in the area. In the process, you can enjoy nature and breathe in the fresh air! My favorite local webpage is the Will County Forest Preserve site…so much information is available about our surrounding area:

The Minnesota Department of Natural Resources has this cool guide to hear different songs of birds that are common to us too:

Q: Why did the little bird get in trouble at school?
A: Because he was caught tweeting on a test.

Here are a few of the books we have available in the library:

Don’t forget we have magazines, like Ranger Rick, with information too!

If you prefer e-books, here are search results from Hoopla:

The Audubon Society is a wonderful website to learn about all kinds of birds and some beginning birdwatching tips:

The following Audubon articles introduce you to birds in a greater area- the Great Lakes. You can compare the information with the more local Will County website to really become an expert!

The Happy Birder is another site that has great activities and resources to get started with birdwatching and learning about the great outdoors:

Remember to stop, look up, and listen to start this adventure with our neighbors in nature. Gather some background knowledge, a few simple supplies, and then head outdoors to begin your birding experience…

Libby is a free app where you can borrow eBooks and digital audiobooks from your public library. You can stream books with Wi-Fi or mobile data, or download them for offline use to read anytime, anywhere. All you need to get started is a library card. Libby has easy step-by-step instructions, but any staff member will be able to help you.

Libby has a few other “friend” apps to access eBooks and audiobooks that can broaden your reading horizons even further, as you can see on our website:

The Tumblebooks app is one of my favorites for early readers and there are many areas to explore within this app. TumbleBookLibrary is a curated database of children’s e-books. There are over 1100 titles for grades K-6, and includes animated, talking picture books, read-along chapter books, National Geographic videos, non-fiction books, playlists, graphic novels, as well as books in Spanish and French.

While I am an avid “book in my hand” kind of person, I am starting to read on my devices more frequently. Sometimes, the book I want is checked out and not on the shelf. When this happens, you have the option to check in any or all of the apps listed the NLPL Website. These photos show you the different apps with links to download for your specific device, tutorials to watch, and of course, the help button.

Why should you download any of these apps? Besides convenience and accessibility, throughout November until December 20th, you can enter to win a raffle basket with a Kindle Fire and McAlister gift card!

Stop in soon for help or download any time to be entered! And may the apps be with you….. 🙂

A few years ago, I posted a blog about the introduction of bison at the Midewin National Tallgrass Prairie, just south of Elwood on Route 53. These amazing animals fascinate me, so with that in mind, I decided to feature them again with the upcoming Bison Crawl on November 2nd, presented by the Forest Preserve District of Will County.

Some facts about the importance of this special day can be found at National Today:

A small herd of bison was introduced to the Midewin Prairie in October of 2015. Part of the day’s festivities take will also take place there. To read about the Midewin herd, visit the USDA Forest Service website:

The history of the massive bison herds that once roamed the Great Plains is an important part of our past. Conservation efforts to bring back this animal from near extinction will be discussed at the Forest Preserve and National Prairie presentations. You might even be lucky enough to see the herd if you visit the Iron Bridge Trailhead. More information can be found at the Midewin website or at their Visitor’s center. Here are just a few of the books available at the library if you’d like a head start on learning about bison before you head out to the activities:

If you’re interested in doing further research (about bison or any other subject area), the library has databases available in Homework Help. When you scroll down the page, you will find Scholastic Go! which can be a great aid for school projects. This link will take you to more bison articles.

I hope this will inspire you to learn more about our national mammal and conservation efforts throughout the country to restore the bison to their home on the range.

Hundreds—yeah, hundreds!—of new stories and educational audiobooks have been added to your RBdigital subscription through the library.

RBdigital also offers an always-available collection of classic and kids’ audiobook titles that are compatible with most devices after a brief account set-up. That’s right—no holds!

Go to the RBdigital section on A–Z Online Resources to access these new items, or open up your RBdigital app if you’re already using it.

Follow us for kid-focused programs, collections and more at @nlplkids, and @nlpl_teens for tweens and teens! We have a new magazine in the Youth Services Magazine Section and it is called ChopChop. ChopChop is a quarterly magazine. Winner of the prestigious 2013 James Beard Foundation Award for Publication of the Year, ChopChop is filled with nutritious, great-tasting, ethnically diverse, and inexpensive recipes. It also has fun food facts, games and puzzles, and interviews with healthy heroes.

Fall is in the air and it definitely ’tis the season for all things pumpkin! Whether you are decorating for fall, preparing for Halloween, or just noticing pumpkins wherever you go, you might like to brush up on your knowledge of these orange globes which are invading the area.  Here are a few interesting tidbits to share with others:

Learn more about pumpkins at these websites or stop in to browse the card catalog for our books: How Many Seeds in a Pumpkin? E MCN

How Big Could Your Pumpkin Grow?  E MIN

Pick a pumpkin, pick a book, pumpkins are everywhere you look! October is the month of skeletons, goblins, and all things spooky as everyone knows.  But did you know that these children’s authors and illustrators were born in October?  And judging by some of their works, it seems to be an eerie coincidence….

5- David Shannon wrote and illustrated his first book at age 5- pictures of things he shouldn’t do with the words “No, David” on each page …His mother later sent him this early work which resulted in him writing and illustrating his popular book No, David!

The illustrations in the Jon Sieszka Trucktown series are Shannon’s work.

People and things from his real life help him develop story ideas- He really has a dog named Fergus, that looks like the dog in his book Good Boy, Fergus! You can see Fergus in the video below:

Check out more about David Shannon at his website: or find these books by the tree:

8th-  R.L. Stine started writing at the age of 9 when he found an old typewriter in the attic…his first works were jokes!

In the 1970’s, he created a children’s humor magazine called Bananas!  He even wrote jokes for the Bazooka Joe Bubble Gum comics. (Ask mom or dad if they remember that!)

His first Goosebumps book was written in 1992 and has since been translated into 32 different languages.

R.L.Stine’s website below has some really cool games and activities: Here’s a peek at a few titles…

Attack of the Jack-o-Lanterns    JP STI

but we have many, many more… including DVD’s!

19- Ed Emberley has written and illustrated close to 100 books, including books with “how to draw” lessons. Listen to Ed talk about his work here and try your hand at drawing:

19- Dan Gutman wrote Honus and Me in 1994, but was rejected by 10 publishers before his work was finally printed.  He then went on to write 12 books in the Baseball Card Adventure Series.

His newest series, The Genius Files, is about a set of twins named Pepsi and Coke MacDonald.  This guy is a writing machine!! and many, many more from all the My Weird School series!

and many more Baseball Card Adventures!

Here is another website about Dan, where you can learn more about him and his work: Perhaps reading about a few of these great October celebrities will inspire you to start illustrating or writing your own stories….spooky or not!